Poezio is a free console XMPP client (the protocol on which the Jabber IM network is built).

Its goal is to let you connect very easily (no account creation needed) to the network and join various chatrooms, immediately. It tries to look like the most famous IRC clients (weechat, irssi, etc). Many commands are identical and you won't be lost if you already know these clients. Configuration can be made in a configuration file or directly from the client.

You'll find the light, fast, geeky and anonymous spirit of IRC while using a powerful, standard and open protocol.

Discuss on your favorite topics with your friends or strangers.

Switch devices while staying in the same conversations without losing messages.

Add the features you want through official or other plugins.

Send and receive messages with colors and formatting.

See the writing status of your contacts. 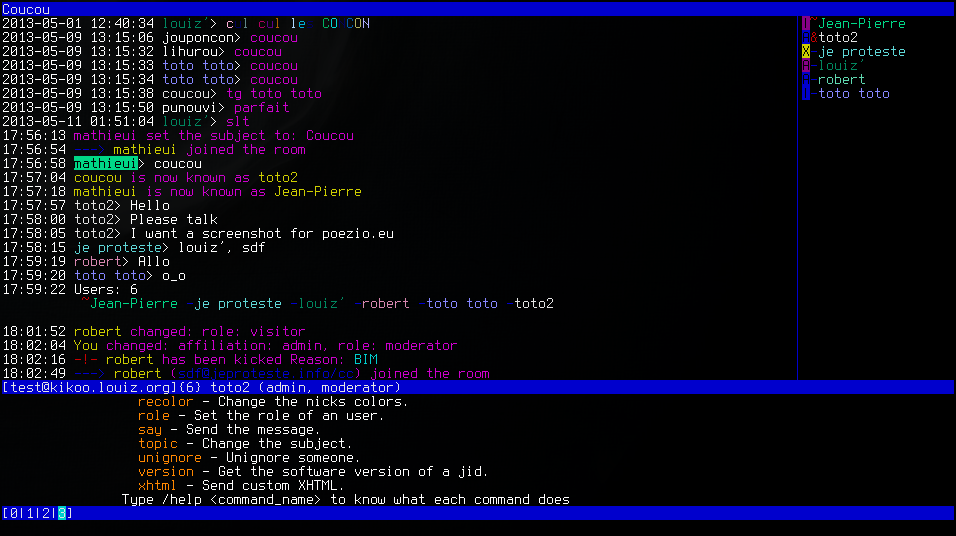 The development version is recommended.

First install python 3.7 or above (and the -devel package associated with it), git, then enter the following in your console:

Then, you can use ./update.sh to update the sources and the dependencies, from time to time, if you want to test the new features, and be able to report bugs to us.

Alternatively, here are the more conventional downloads; follow the documentation in order to install poezio:

August 24th 2018:
The forge used by both poezio and slixmpp has migrated from redmine to gitlab.

August 13th 2018:
Poezio 0.12 has been released, with many improvements and bugfixes.

October 9th 2016:
Poezio 0.10 has been released, and includes a lot of improvements, see mathieui’s blog or the changelog file for more details.

July 31th 2015:
Poezio 0.9 has been released. It now uses slixmpp, and includes a lot of other improvements, see mathieui’s blog or the changelog file for more details.

Feb 22th 2014:
Poezio 0.8 has been released. Please update your packages according to the documentation.

Oct 17th 2011:
Poezio is now using git. Please update your package, sources, scripts, etc.
If your are using the mercurial version, with the method described on the download page (and you should be), please redo the complete instructions, or you won’t be able to update the sources by keeping only the mercurial repository

Documentation for the git version is available at doc.poez.io.

To contact us, you can join the jabber chat-room at poezio@muc.poez.io.

We understand English and French.

The bug tracker is located at dev.poez.io.

I've tested poezio but I don't like it, what can I do? Why is poezio released under the zlib licence, why did you choose to switch from GPLv3? What does “poezio” mean?